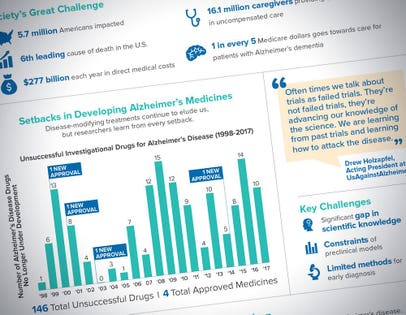 The country’s leading biopharmaceutical research companies seem cautiously optimistic in their latest update on the state of Alzheimer’s research in America.

The Pharmaceutical Research and Manufacturers of America (PhRMA) has released its latest report—Researching Alzheimer’s Medicines: Setbacks and Stepping Stones. In it, PhRMA reported that between 1998 and 2017 there were some 146 failed attempts to develop medicines to treat and potentially prevent Alzheimer’s disease. And only four new medicines were approved to treat the symptoms of the disease.

That means, for every research project with the goal of finding a new medicine for Alzheimer’s disease that succeeded, about 37 failed. Still, there are currently 92 medicines for the treatment of Alzheimer’s and other dementias in clinical development today.

Since 2000, PhRMA member companies—including Bayer Corporation, Eli Lilly and Company, GlaxoSmithKline (now GSK), Merck & Co., Inc., Pfizer Inc. and 33 others—say they have invested more than $600 billion in the search for new treatments and cures, including an estimated $71.4 billion in 2017 alone.

The new report builds upon past knowledge of Alzheimer’s setbacks as well as victories. The last report was completed in 2015.

Though there have been many failures in the quest to treat or cure Alzheimer’s disease, George Vradenburg, co-founder and chairman of UsAgainstAlzheimer’s, remains optimistic and encourages others to do the same.

“In recent years, a dearth of new treatments for Alzheimer’s disease has left many to conclude that a cure is out of reach,” he said. “As this report demonstrates, there’s no doubt that setbacks are inevitable and instructive when tackling a complex disease like Alzheimer’s. But given the increase in understanding of the disease in the past few years and the steady rise in Alzheimer’s treatments in development, patients and their families have good reason to be optimistic.”

In fact, a recent analysis of late stage Alzheimer’s drugs, conducted by ResearchersAgainstAlzheimer’s, a global network of leading researchers, found nearly a hundred treatments in Phase 2 and 3 development in 2018, Vradenburg said. “The analysis demonstrates that the drugs in development are increasingly attacking the disease in different ways – an important fact given that successful future treatments will likely rely on multiple therapies to stop the disease.”

What’s just as concerning to Vradenburg, though, is that there are signs that indicate the U.S. healthcare system may not be prepared to administer novel treatments to patients when they do become available. “As the science progresses, physicians, lawmakers, advocates, and industry leaders must work together to ensure we’re all ready for life-saving treatments,” he said.

Despite the diversity of treatments in development, Vradenburg contends:

“This lack of preparation and training has led to a shortage of treatments for cognitive impairment, an oversight of potential risk reducing behaviors, and often late and inaccurate diagnosis of Alzheimer’s,” Vradenburg said. “From polio to HIV/AIDS, past global health efforts have taught us that we can successfully tackle challenging healthcare issues if we are focused and collaborative. And at a time when the global impact of Alzheimer’s is sharply rising, it’s now more important than ever that the Alzheimer’s community – including researchers and advocates – come together to accelerate a cure.”

According to Eric Karran, a molecular biologist and vice president of the Foundational Neuroscience Center at AbbVie, scientists’ understanding of complex neurodegenerative diseases has indeed evolved in recent years. “What’s really changed is the recognition that the disease process starts very early on in people, and it precedes the actual symptoms that they suffer from by about 10 to 20 years,” he said. “This is incredibly important because it shows us that for medicines to be effective we need to find a way to treat people even before they present with clinical symptoms. And that has driven a whole lot of the science that we call biomarkers. These are things that you can measure that correlate with disease process. And we ultimately hope that we can measure some of these pathological processes going on in the human brain with imaging agents.”

Prior to working for AbbVie, Karran was the director of Research for Alzheimer’s Research UK. He has also held senior positions in a number of companies, including SmithKline Beecham (now GSK), Pfizer, Inc., Eli Lilly and Company and at Johnson & Johnson.

Karran said to date, scientists’ understanding of Alzheimer’s is that a small protein called Abeta starts to deposit in the brain to form abnormal aggregates called plaques. “That seems to be the first thing that occurs in the brain,” he said. “And for reasons we don’t fully understand, that provokes a response in the brain whereby another pathology called tau tangles forms in neurons and then spread throughout the brain. This starts in one part of the brain, called the entorhinal cortex, which is very important in memory consolidation and retrieval. But then it spreads throughout the brain ultimately causing the cognitive decrements that we see in Alzheimer’s disease—loss of memory, loss of the ability to make decisions, and ultimately loss of language.”

Genetics also plays an important role in Alzheimer’s disease and has impacted scientists’ research and the types of treatments that they pursue since the 1990s. “What scientists discovered was that a single change to a gene called the amyloid recursor protein was able to initiate early Alzheimer’s disease with 100 percent certainty.” He said. “So, this was a very, very important clue that this process—which ultimately leads to the amyloid plaque—is critically important in Alzheimer’s disease. And with that understanding, we were able to design animal models in species like the mouse that have some of the pathology of Alzheimer’s disease. And in turn that has enabled us to test compounds and therapeutic approaches to either delay or clear the amyloid from the brain. These therapeutic approaches have been or are now being tested in human clinical studies.”

The PhRMA report holds that “despite numerous studies and significant investment by biopharmaceutical companies and others, setbacks continue to outnumber successes in Alzheimer’s drug development.” And few candidate medicines—about 12 percent—are approved by the FDA and thus ultimately reach patients.

According to the report, scientists still do not have a full understanding of the underlying causes and mechanisms of Alzheimer’s disease. “In fact, it is unknown whether many of the defining molecular characteristics of the disease are causes, effects, or signs of progression. This knowledge gap compounds the challenge of identification and selection of viable targets for new medicines.”

Still, scientists believe that even the failures can be tremendously valuable, as they provide crucial insights that help shape future research efforts. “As the data from a negative outcome are analyzed, the key findings are applied in the design of new studies and approaches, until ultimately a successful outcome or proof-of-concept for a new therapy is achieved.”

And there is more good news. An analysis by UsAgainstAlzheimer’s of the 92 medicines in development found that of those in Phases 2 and 3, approximately 75 percent have the potential to be disease-modifying treatments.

“These drug candidates could stop or slow down disease progression by targeting one or more of the changes in the brain associated with the disease,” the report states. “The majority of drugs in the pipeline target beta-amyloid plaques, tau protein tangles, and a receptor that decreases a neurotransmitter necessary for the brain to think and function normally.”

The caution, say researchers, is in realizing the size of the hurdle without believing it to be insurmountable. They recommend much collaboration and research-friendly public policy. “Despite this promising pipeline, the substantial complexity of Alzheimer’s disease indicates that we must be prepared for many more setbacks before researchers discover how to prevent, halt, or cure Alzheimer’s,” the report states. “The findings in this report illustrate why it is important to support a broad and vibrant research enterprise to foster this progress. Thoughtful public policies are needed that encourage innovators to continue taking the risks, making the substantial research investments required, and building upon setbacks to achieve eventual success against serious diseases and conditions like Alzheimer’s disease.”

The report praises the FDA’s commitment to continue to modernize its drug regulatory programs and its efforts to keep pace with the latest scientific developments. “For example, in 2018, FDA issued guidance to inform research efforts into interventions that stop Alzheimer’s disease before it causes clinical problems. This guidance provides innovators with important information on ‘approaches to studying very early disease before the onset of dementia, including strategies for trials incorporating patients with Alzheimer’s who haven’t experienced any visual impairment (in the form of cognitive or functional deficits), but who may be identified through the use of sensitive cognitive screening, imaging tests, or biomarkers.’”

Below are three examples of innovative partnerships listed in PhRMA’s report that are bringing together the brightest minds to overcome one of society’s great challenges:

“Despite recent failures, we have learned a lot and have much reason to be optimistic,” said John Dunlop, Vice President of Neuroscience Research at Amgen. “This is particularly true when it comes to early intervention approaches, where the latest science is telling us we have the greatest opportunity to impact disease progression – an area of somewhat uncharted territory in the history of Alzheimer’s disease drug discovery.”