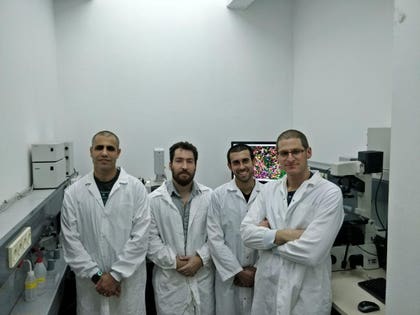 Researchers at Tel Aviv University (TAU) have invented the first fully personalized tissue implant, engineered from a patient’s own materials and cells. According to lead researcher Prof. Tal Dvir, the new technology makes it possible to engineer “any kind of tissue” from one small fatty tissue sample and, after transplantation, efficiently regenerate any diseased or injured organ.

Dvir’s researchers are doing it with cells once thought impossible to re-engineer—those from the brain and heart. And what’s more, because the material is taken from the patient themselves, the risk of a negative immune response to an organ implant virtually disappears.

If researchers are successful in humans, the implications for treating disease could be immeasurable–the possibility of healing the spinal cord or even the heart and brain. “With our technology, we can engineer any tissue type, and after transplantation we can efficiently regenerate any diseased or injured organ — a heart after a heart attack, a brain after trauma or with Parkinson’s disease, a spinal cord after injury,” Dvir said. “In addition, we can engineer adipogenic (fatty tissue) implants for reconstructive surgeries or cosmetics. These implants will not be rejected by the body.”

Dvir said researchers have already proved their technology’s effectiveness in animals. Now they are looking for private investors and venture capitalists to invest in the research so Dvir and his team can take it to human trials.

Nevertheless, what they’ve already done is game-changing. “We were able to create a personalized hydrogel from the materials of the biopsy, to re-program fatty tissue cells into stem cells and differentiate them into different cell types and to engineer cardiac, spinal cord, cortical and other tissue implants to treat different diseases,” said Dvir of TAU’s Department of Biotechnology, Department of Materials Science and Engineering, Center for Nanoscience and Nanotechnology and the Sagol Center for Regenerative Biotechnology, who led the research for the study. “Since both the cells and the material used derive from the patient, the implant does not provoke an immune response, ensuring proper regeneration of the defected organ,” Dvir said.

The research was conducted by Dvir’s postdoctoral researcher Reuven Edri and doctoral students Nadav Noor and Idan Gal, in collaboration with Prof. Dan Peer and Prof. Irit Gat Viks of TAU’s Department of Cell Research and Immunology and Prof. Lior Heller of Assaf HaRofeh Medical Center in Israel. It was published in Advanced Materials.

Dvir is an associate professor at TAU in Israel. He conducted his postdoctoral studies in the laboratory of Prof. Robert Langer in the Department of Chemical Engineering at MIT—focusing on advanced materials for tissue engineering and regeneration. Dvir has been a faculty member at the School of Molecular Cell Biology and Biotechnology, the Department of Materials Science and Engineering and the Center for Nanotechnology at TAU since 2011. Dvir is also the founding director of the Sagol Center for Regenerative Biotechnology. He lab-designs and develops smart bio and nanomaterials and technologies for engineering complex tissues, such as the heart, brain, spinal cord, intestine and eye.

Tissue engineering is not new. But the process has been done up to now with synthetic or non-human materials, leaving the patient vulnerable to complications since their bodies could reject the foreign tissue. “Currently, in tissue engineering for regenerative medicine, cells are isolated from the patient and cultured in biomaterials to assemble into a functional tissue,” Dvir said. “These biomaterials are always either synthetic or natural, derived from plants or animals. After transplantation, they may induce an immune response that leads to rejection of the implanted tissue. Patients receiving engineered tissues or any other implants are treated with immuno-suppressors, which themselves endanger the health of the patient.”

In this latest research, scientists extracted a small biopsy of fatty tissue from patients, and then separated its cellular and a-cellular materials. While the cells were reprogrammed to become induced pluripotent stem cells — able to make cells from all three basic body layers, so they can potentially produce any cell or tissue the body needs to repair itself — the extracellular material was processed to become a personalized hydrogel. After combining the resulting stem cells and the hydrogel, the scientists successfully engineered the personalized tissue samples and tested the patients’ immune responses to them.

“When we reprogram fat cells, manipulating genes to become embryonic–like stem cells, then theoretically, we can make them into any cell, tissue or organ we want,” Dvir said. “So far we have created heart tissue, spinal cord tissue and cortical and dopaminergic tissues. We even created fatty tissue for reconstructive surgery. This has been done before but not matching the patient. We are the first to rely on a patient’s own cells and materials. It’s completely personalized.” (Dopaminergic cells are a subset of neurons that release dopamine. In Parkinson’s disease, the engineered tissue would release or secrete dopamine which people with the disease are lacking.)

Scientists at TAU have completed pre-clinical trials with the heart and spinal cord, and experimentation is ongoing with Parkinson’s disease. They hope to begin clinical trials in humans within the next couple of years.

Dvir said, “It works in animals. We saw complete regeneration in three months in mice and rats. With the heart, we are even more advanced. However, as we all know, animals and humans are different. We hope to prove that the technology works in humans as well.”

Dvir said implications for the technology are vast. Though they cannot treat cancer or genetic disorders, personalized stem cells could help people with Congestive Heart Failure (CHF), amyotrophic lateral sclerosis (ALS), cartilage degradation and the need for prosthesis. Scientists could regenerate bone, intestines and even the eyes. “Theoretically we can work in every disease or disorder that cells are involved in, where tissue is dying. We can create the tissue to fix that injury by a simple injection of materials and cells at the injury site,” he said. “We will replace diseased tissue with new tissue.”

“We believe that the technology of engineering fully personalized tissue implants of any type will allow us to regenerate any organ with a minimal risk of immune response,” Dvir concluded.