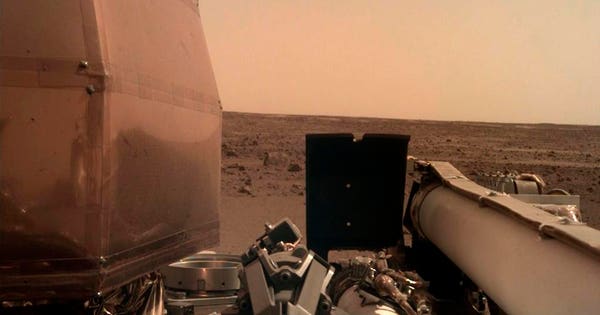 This photo provided by NASA shows an image on Mars that its spacecraft called InSight acquired using its robotic arm-mounted, Instrument Deployment Camera (IDC) after it landed on the planet on Monday, Nov. 26, 2018. The NASA spacecraft designed to drill down into Mars’ interior landed on the planet Monday after a perilous, supersonic plunge through its red skies, setting off jubilation among scientists who had waited in white-knuckle suspense for confirmation to arrive across 100 million miles of space. (NASA via AP)ASSOCIATED PRESS

InSight’s road to Mars was paved, in part, by the crashed remains of the landers that came before it. It’s an easy fact to lose sight of when it’s possible to watch a livestream of the landing on your smartphone: landing an automated spacecraft on Mars remains a very challenging task. The Soviet Mars lander 2MV-3 No. 1 never made it out of low Earth orbit after its launch on November 4, 1962, much like a whole series of US and Soviet Mars flyby and orbiter missions in the early 1960s. Some failed on launch, others didn’t make it to orbit, and others stayed in orbit. And that’s the easy part of the mission.

The Soviet Union launched a pair of twin Mars missions in May 1971; each orbiter launched with a landing module, and each landing module carried its own little Prop-M rover, which would deploy on a tether cable and explore a small patch of the Martian surface — on skis, even. Six months later, the Mars 2 lander became the first human-made object to crash into Mars when its parachute failed to deploy. Soviet officials blamed a systems malfunction, possibly triggered when the lander entered the Martian atmosphere at a steeper angle than planned.

A few days later, the Mars 3 lander landed safely on Mars, becoming the first human-made object to do so. But the Soviet triumph was short-lived, because the lander stopped transmitting after about 20 seconds; it managed to send home only a grainy partial image of what looks like the Martian horizon (which appears to be sideways due to a quirk of the camera, not the angle of the lander, which is believed to have landed upright). No one is sure why; something could have gone wrong with the lander’s electrical or communications systems, or with the communications relay in the Mars 3 orbiter. Electrical activity in a large dust storm could also have damaged the lander’s electronics.

Another pair of twin Mars missions, Mars 6 and Mars 7, launched in August 1973. These spacecraft were meant to make close flybys of Mars, dropping off their landers along the way. Mars 6 plunged into the Martian atmosphere on March 12, 1974 and lost contact with Earth in the final seconds before its landing retro-rockets were supposed to fire. Mars 7 glitched during a maneuver on March 9, 1974, and missed the planet entirely, ending up in orbit around the Sun.

The US Viking 1 and Viking 2 landers succeeded in 1975, and Pathfinder and its Sojourner rover made it in 1996. But in 1999, after that string of successful touchdowns, NASA’s Mars Polar Lander reminded us that it’s called rocket science for a reason. It reached Mars on December 3, 1999 after nearly a year of travel through space as part of the Mars Surveyor ’98 mission, but it never called home after landing. Later analysis suggested that the lander’s engine had stopped firing while it was still high above the Martian surface, causing the lander to slam into the rocky Martian surface much too fast to survive. But NASA’s analysts couldn’t rule out other problems, like a micrometeoroid impact that might have damaged the lander’s heat shield, a loss of control due to shifting weight or atmospheric buffeting, or problems with the terrain or other conditions at the landing site. Nearly a decade later, NASA’s Mars Phoenix lander carried out most of the soil and climate studies MPL had been meant to do.

This artist’s rendering provided by the European Space Agency shows the Beagle-2 lander. The spacecraft went missing on Christmas Day, 2003, when it was supposed to land on Mars and start transmitting data back to Earth. On Friday, Jan. 16, 2015, more than 11 years later, ESA officials reported that it had been finally found — thanks to extensive detective work based on new photos taken by the high-resolution camera on NASA’s Mars Reconnaissance Orbiter. (AP Photo/ESA)ASSOCIATED PRESS

In June 2003, the UK Space Agency’s Beagle 2 lander launched along with ESA’s Mars Express mission. The lander carried instruments to search for signs of past life on the Martian surface. But on Christmas Day 2003, something went wrong. Beagle 2, like MPL before it, never checked in with Earth after its scheduled landing. Years later, in early 2015, the HiRISE camera aboard NASA’s Mars Reconnaissance Orbiter spotted the lander, perfectly intact and upright, sitting on the Martian surface. It turned out that two of the lander’s solar panels had failed to unfold properly, so they blocked the lander’s communications antenna. Beagle 2 had apparently arrived safely; it just couldn’t call home.

The Spirit and Opportunity rovers landed safely in 2004 and 2005, and Curiosity joined them in 2011. But Mars stuck again in 2016. ESA and the Russian space agency Roscosmos had designed the Schiaparelli lander mostly to test soft landing technology for future Mars missions, but on October 19, 2016, the test ended badly. As the Giant Metrewave Radio Telescope and the Mars Express orbiter (which had lost its own lander just a few years before) watched in realtime, Schiaparelli went ominously silent in the final minute of its descent. NASA’s Mars Reconnaissance Orbiter photographed the crash site a few days later, and those images, along with the five minutes of telemetry data the lander managed to send home, are still being used to investigate the loss.