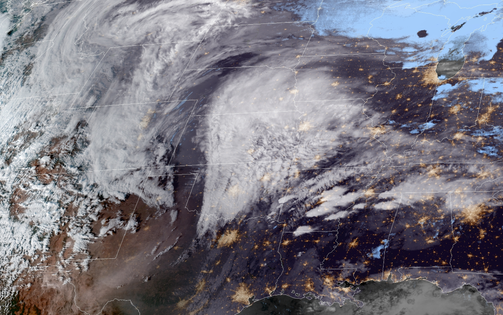 It’s been quite the couple of weeks for pre-winter snowstorms in the center of the country and that trend doesn’t seem to want to stop as we head into the first weekend of December. A large low-pressure system developing over the central Plains right now looks like it’s on track to bring significant snows to the Plains and Midwest through the end of this weekend. Some areas could be pushing 18-20 inches of snow by the end of the storm.

The storm responsible for the impending thump of snow is the same one causing the dangerous severe weather outbreak tonight and Saturday across some of the southern states, including the risk for tornadoes, damaging winds, and very large hail. The juxtaposition of severe weather to the south and near-blizzard conditions to the north is pretty common in big storms that develop in the late fall and early winter.

We could be looking at a long-duration snowfall event with this storm. This won’t be one of those storms where it rages for six hours and it’s over. Some towns could see steady snow for two days.

Precipitation will likely change over from rain to snow during the overnight hours between Friday and Saturday. The heaviest snow will start cranking early Saturday morning across the Plains and spread east through parts of Iowa and Minnesota through Saturday evening. The snow will taper off from west to east through the day on Sunday as the low moves toward the Great Lakes. While the snow will continue through Sunday, the heaviest snow—coinciding with the peak of the low-pressure system’s strength—will occur on Saturday.

The latest forecast from NOAA’s Weather Prediction Center shows a pretty big bullseye of more than a foot of snow across the central Plains, mainly focused on sparsely populated parts of Nebraska and South Dakota. Some of these areas could easily see more than a foot-and-a-half of snow, and it’s not uncommon in a scenario like this for someone to crack two feet if they get stuck under a heavier band.

This storm will have a fairly large extent of snowfall totals exceeding six inches, which is denoted by the dark blue shading on the map above. Rapid City, South Dakota, could stand to see a foot of snow by the end of the storm on Saturday, and cities like Pierre, Sioux Falls, Grand Island, and North Platte could see enough snow to disrupt everyday life through the end of the weekend.

More snow this weekend will add to the already-hefty totals the central United States has seen this fall. This snowstorm will fill in many of the gaps that exist in the center of the country on the seasonal snowfall map through November 28. It’s unusual to see this much snow so early in the season, but it’s not necessarily an omen of what to expect as we head deeper into the winter months.