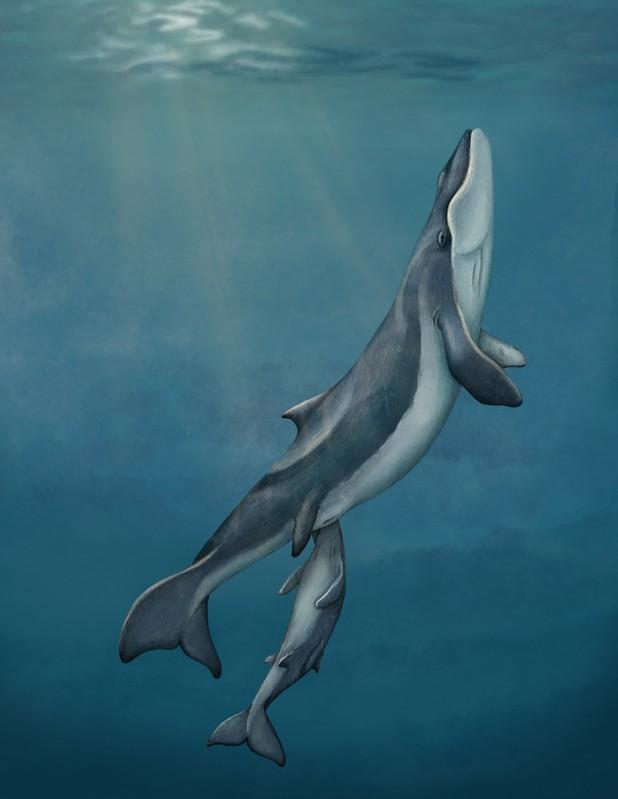 An illustration showing an artistic reconstruction of a mother and calf of Maiabalaena nesbittae nursing offshore of Oregon during the Oligocene, close to 33 million years ago, in this image provided by the Smithsonian Institution in Washington, U.S., November 29, 2018. Smithsonian Institution/Handout via REUTERS

The researchers described fossils unearthed in Oregon of a whale named Maiabalaena nesbittae that lived 33 million years ago and possessed neither teeth nor baleen, the material that modern filter-feeding whales use to strain large amounts of tiny prey out of the water for food.

They called Maiabalaena, meaning “mother whale,” a surprising intermediate evolutionary stage between modern baleen whales and their toothed ancestors. Maiabalaena consumed fish and squid by sucking them into its mouth.

The evolutionary steps that led to modern baleen filter-feeding giants like the blue whale, Earth’s largest-known animal past or present, had remained unclear. Baleen is a flexible material made of keratin, the same stuff found in hair and fingernails.

One leading hypothesis had been that in the early stages of baleen whales’ evolution they possessed both teeth and baleen before later becoming toothless. Maiabalaena’s position on the whale family tree, the researchers said, instead indicates that tooth loss preceded baleens by millions of years.

“This fossil demonstrates that the loss of teeth and the origin of baleen are separate evolutionary changes, and that the two changes did not overlap,” said Nick Pyenson, curator of fossil marine mammals at the Smithsonian Institution’s National Museum of Natural History and author of the book “Spying on Whales.”

“Maiabalaena suggests that key evolutionary changes in the way that baleen whales feed, such as the loss of chewing, must have occurred before the innovation of filter feeding,” Pyenson added.

The fossils discovered near the Pacific coast in Oregon’s Lincoln County showed Maiabalaena boasted well-developed bones in the throat that served as attachment points for muscles that depress the tongue and help produce suction.

“Suction feeding may seem strange for an ancestor of today’s blue whales, but it’s actually a very common mode for living toothed whales such as sperm whales and many species of dolphins,” said George Mason University paleobiologist Carlos Mauricio Peredo, a predoctoral fellow at the museum.

The research was published in the journal Current Biology.

Reporting by Will Dunham; Editing by Bill Berkrot