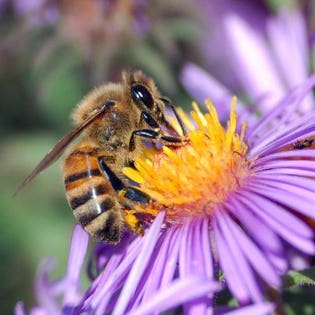 A female honeybee with two fathers — and no mother — has been discovered; the first ever of her kind observed in nature

A team of scientists discovered a female honeybee that has two fathers — and no mother — the first ever of her kind observed in nature.

Female bees, ants and wasps (Hymenoptera) arise from fertilized eggs that have one set of chromosomes from each parent, whilst males result from unfertilized eggs. In honeybees, females — queens and workers — have a total of 32 chromosomes, whereas males (drones) only have half as many.

“By definition in all haplodiploids (bees, ants and wasps) the male is haploid — created from an unfertilized egg, meaning it only has one set of chromosomes from its mother,“ said molecular biologist, Sarah Aamidor, lead author of the study and a graduate student in biology at the University of Sydney, in email.

In honeybees, gynandromorphs typically develop from the combination of a diploid zygote and a haploid male tissue originating from a second sperm (ref & ref). This is made possible by the fact that honeybees are polyspermic, a situation where more than one sperm enters the egg and fuses to the initial cell cluster. These cells then begin to divide and become part of the developing embryo.

But what causes a gynandromorph honeybee? This was one of the questions that motivated Ms. Aamidor and her colleagues to undertake this study (ref). Although gynandromorphs result from a rare genetic mutation, it’s not clear how and why they appear.

To identify what causes gynandromorphs in honeybees and to better understand the flexibility of honeybee reproduction, Ms. Aamidor and her collaborators collected 11 newly emerged putative gynandromorph honeybees from a single colony, dissected them and examined the morphology of various tissues within each bee to identify its sex. They then extracted DNA from each tissue and identified the genetic origin (maternal or paternal) of each tissue through genotyping.

Genetic studies revealed that nine of the 11 gynandromorphs had either two or three fathers. Astonishingly, one gynandromorph — a female — had two fathers but no mother — an event that could only have resulted from sperm fusion.

“This is the first report of a phenomena of a bee with two fathers and no mother in hymenoptera,” Ms. Aamidor said.

“The female bee that had two fathers created by the fusion of two sperms is the first reported in haplodiploids and is an interesting phenomena considering that attempts to fuse two sperm in mammalians have not [been] found to be possible,” Ms. Aamidor elaborated in email.

“We show here individuals are composed of three and even four parental origins (one mother and 2–3 fathers) that still create a live bee.”

This study begins to expand our limited understanding of the truly unusual ways that sexual animals can fuse their genomes.

Do gynandromorphs provide some sort of evolutionary benefit to honeybees?

But another group of hymenopterans, the ants, may derive an evolutionary benefit from gynandromorphs.

“In ants it has been suggested that gynandromorphs may have driven the evolution of the dimorphic worker casts,” Ms. Aamidor added in email. “But this is unlikely to be the case in honeybees since there is only one worker type.”

“Beyond these already known examples, there are likely to be equally extraordinary social systems that have not yet been identified or even imagined,” Ms. Aamidor and her collaborators wrote.

A Honeybee With Two Fathers And No Mother | @GrrlScientist